The following guest article has been used by permission of Lara Wilson, Director of Special Collections and the University Archives, University of Victoria (UVIC). It was originally published June 2021 in Ampersands.

Head Librarian Jonathan Bengston came to the Brandt Oyster River Hermitage on March 21, 2021 with a team of people including Lara Wilson and David Young, Records  Management Archivist, to help dismantle Fr. Charles Brandt’s Book and Art Conservation Lab. Many of Charles’ nature photos and others of his collection are also being archived with UVIC.

Future plans are for a working paper and book conservation lab to be opened at the UVIC McPherson Library. It is hoped to include a window wall for the public to observe book and paper conservation in process.

The conservation laboratory and the photographs will continue as witness to some of the many legacies of the hermit monk and Catholic priest Charles Brandt, who died October 25, 2020.

on behalf of the Brandt Oyster River Hermitage Society

The hand tools for embossing materials such as leather are made of bronze, date of manufacture likely early 1900s    Photo: Lara Wilson

Hermit priest, environmentalist, spiritual teacher, and prominent bookbinder, Father Charles Brandt leaves behind many enduring legacies following his death on October 25, 2020, at the age of 97. Among them is his bequest to the University of Victoria Libraries of equipment, tools, and materials from his Hermitage’s conservation lab and bindery, located on the Oyster River at Black Creek on Vancouver Island.

Father Brandt was inspired to move to Vancouver Island to join the Hermits of St. John the Baptist, established in 1964 near the Tsolum River at Merville. Brandt, originally from Kansas City, Missouri, obtained a divinity baccalaureate from Nashotah House Theological Seminary in Wisconsin. Prior to moving to Vancouver Island, Brandt lived in a number of abbeys in the U.S, including St. Gregory’s Abbey (Shawnee, Oklahoma) where he worked as a bookbinder. Brandt sustained his life as a hermit priest through his bookbinding work. Trappist monks in Oregon sent Brandt the bookbinding equipment, which provided Brandt with the foundations to establish his own bindery on Vancouver Island.

Brandt, who had a Bachelor of Science from Cornell University (1948), was passionate about the environment. He eventually moved his hermitage from the Tsolum River to its present location on the beautiful Oyster River, where he lived for nearly 50 years. From his hermitage, Brandt engaged in conservation activities, not only preserving books and historical documents, but also advocating for preserving the natural world. The interconnection between his spiritual life and the natural world can be found in his books Meditations from the Wilderness (1997) and Self and the Environment (1997).

UVic Libraries was among Brandt’s clients and his bookplate can be found tucked into a number of volumes. The business card for the Brandt Conservation Centre, lists the following services:

Works of Art on Paper

Prior to the recent pandemic restrictions, UVic Libraries staff oversaw the packing and transport of the bequeathed materials to their new home, in the nascent print room of the Mearns Centre for Learning – McPherson Library. In the coming years, these materials, along with equipment and supplies from additional bequests and gifts, will be utilized through experiential learning opportunities for UVic students, as well as through workshops and other public programming. Among the materials received were book presses, binding leather, marbled endpapers, a skiving machine, Fr. Brandt’s custom watermarked archival paper, papermaking screens, embossing tools, gold leaf, and a massive “Robust” paper cutter. 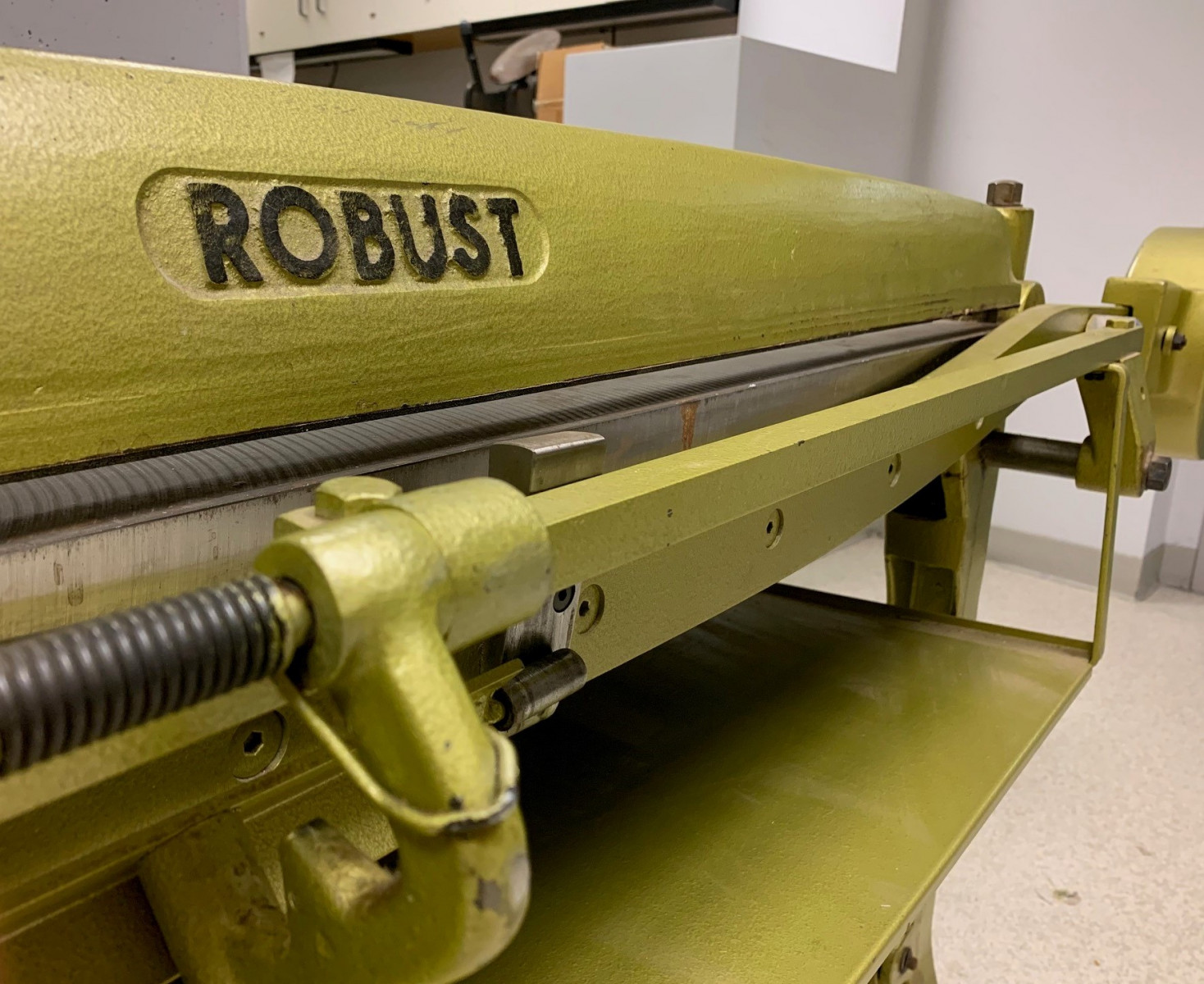 The Hermitage will live on as a spiritual retreat, with the 27 acres placed in a land conservancy and the property bequeathed to the Comox Valley Regional District. Fr. Brandt’s bequests will enrich our communities now and in the future. To learn more about Father Brandt, please see Brian Payton’s article in Hakai Magazine, “The Oracle of Oyster River.”

Conservators and staff who took part in the Mobile Conservation Laboratory 1979 pilot project pose outside the Canadian Conservation Institute in Ottawa. Each conservator holds a tool of their trade. Charles Brandt (center) holds a Japanese paste brush.

Photo is courtesy the Government of Canada, Canadian Conservation Institution and from Book Arts 2014 – volume 5, no 1