“As people alive today, we must consider future generations: a clean environment is a human right like any other. It is therefore part of our responsibility toward others to ensure that the world we pass on is as healthy, if not healthier, than we found it.”

Part One – Fire and Rain

Things are never dull living off-grid and I’d like to illustrate by outlining the evolution of our home power system since 1979.

First to get your attention, let me be blunt. The off-grid lifestyle is not for everyone and it does come with serious challenges – like the small forest fire we had here on the day Francis and I got married.

Francis describes it here in our wedding album. 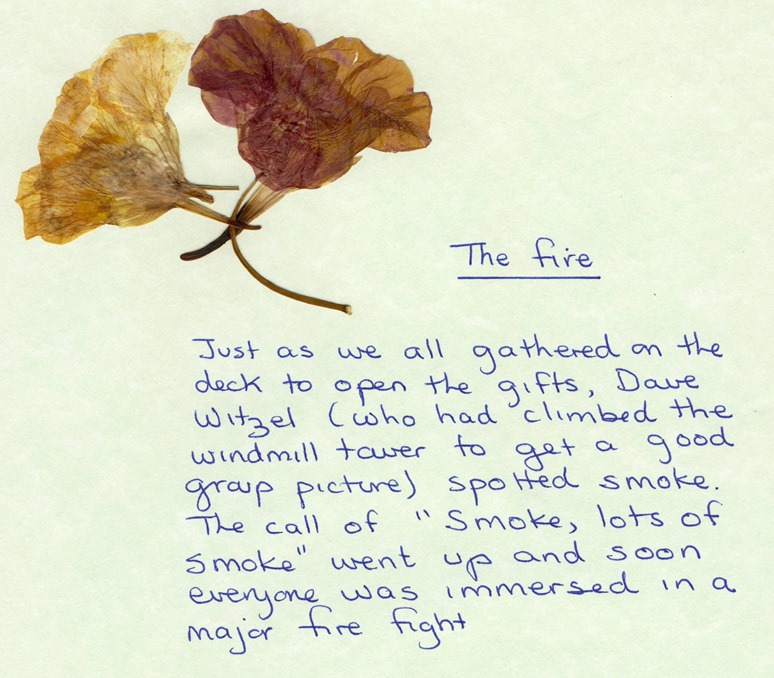 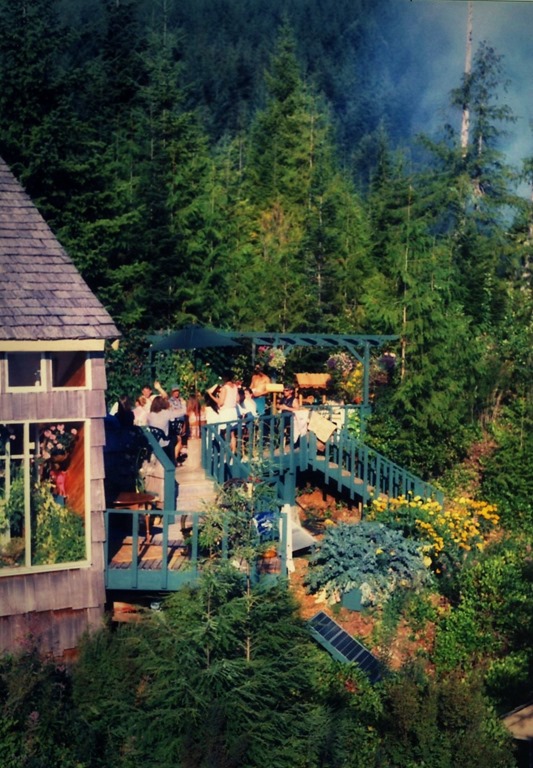 Smoke began to rise just as my brother Dave took this photo. In those days we had a marine radio telephone. We put out the call “Mayday, Mayday” – just like in the movies.

It took about 10 minutes to get garden hoses over to the fire site – the younger women instantly formed a bucket brigade.

Meanwhile, a dozen young men literally tore off their shirts to smother the flaming branches. Then the the water buckets arrived. . . after that the hose. Thankfully, by the time the forest warden’s helicopter landed on the beach below, we had already doused the potential forest fire. Talk about a close call!

It’s a wedding story we and our 70 guests never dreamed to tell. When we cut the cake I was shirtless and covered in soot. Still smilin’ though. By the way – we believe the fire was started from a cigarette butt. Yikes!

For example, along with the trials like the fire (and we’ve had two) we can always enjoy fresh garden produce, an idyllic waterfront setting and forested trails that we can wander through daily.

And it’s with this amazing view Francis is inspired to write her growing popular novels.

Click here to see the cover and story-line of her latest work, No Compass to Right. 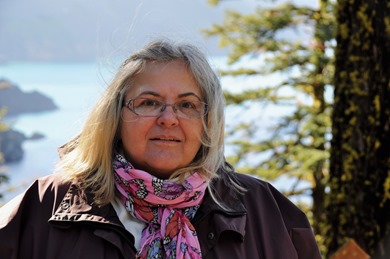 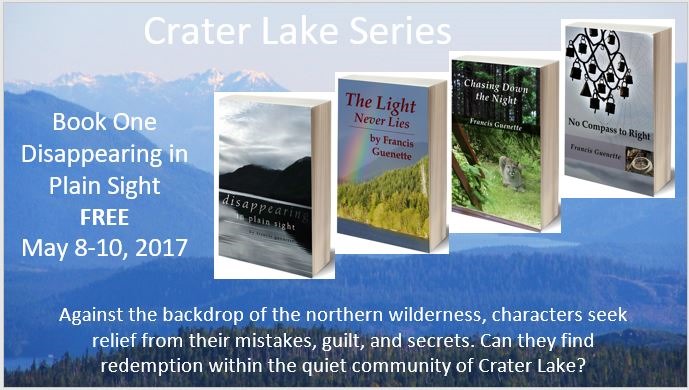 So now (as promised) I’ll illustrate some remarkable energy alternatives to the destructive manner in which society uses power today. Some I’ve covered previously, but never in one post.

Although these examples are rural based, most of this technology is appropriate for city dwellers as well – especially solar.

By way of introduction to our off-grid power system, Francis and I never cease to be amused when we drive into our local community to discover a power outage.

We have been able to avoid such blackouts because we produce our own electricity from a variety of energy sources – primarily green renewable energy.

First and Foremost is the Sun. 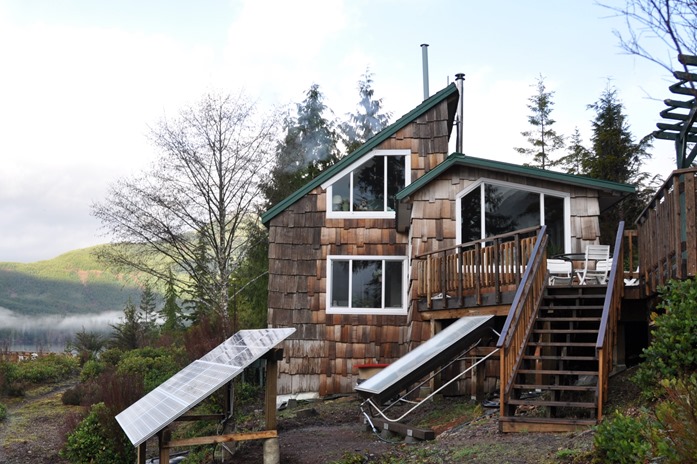 For Francis and I, here is how we use solar energy. When sun shines through our South facing windows it is absorbed into the cabin and provide us heat. This is known as Passive solar gain. Separate solar panels create electricity and also help heat our water.

The electricity created is stored in batteries and hence we are able to cook with an electric convection oven, an electric conduction hot-plate, or a crock pot. Also, we use two solar ovens that focus the sun and trap the heat to achieve cooking temperatures high as 325 degrees F. 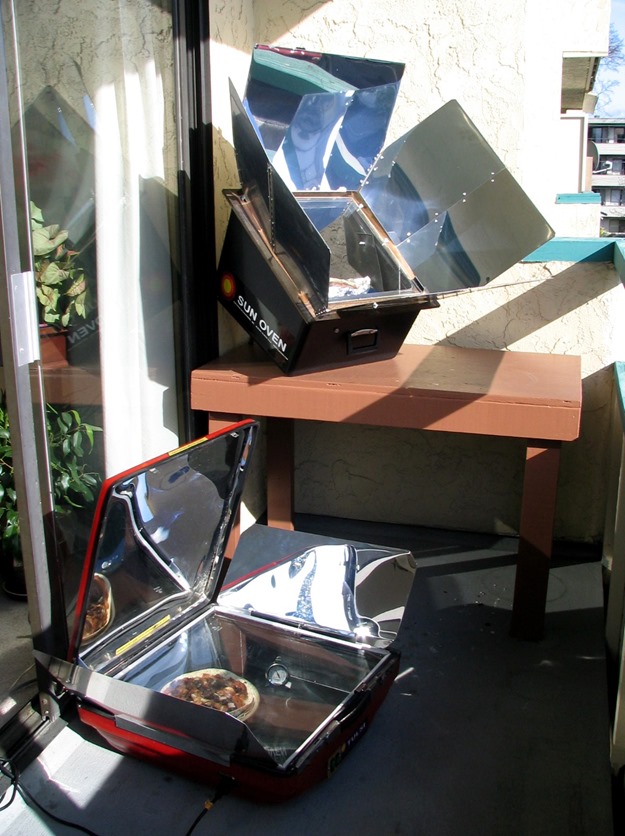 During rainy and windy times we also use water power . . .

Here’s our hydro turbine water intake. (I’ll give details about this in my next post).

Like many country folk we use firewood for back-up heating –

I’d be amiss not to mention the most simple way we use the sun – via photosynthesis that happens in our garden – again, details of this for a future post.

In our rural landscape, bears are integral to the local eco-system.

Lucky that Billy–Bob the Bear doesn’t like the Zucchinii in the coldframe – or potatoes either.

I began to build the cabin and homestead about 1978, much before Fran and I were together. Every single piece of building material was carried in by hand and wheel barrow, 70 stairs down and a 10 minute walk from the gravel logging road. 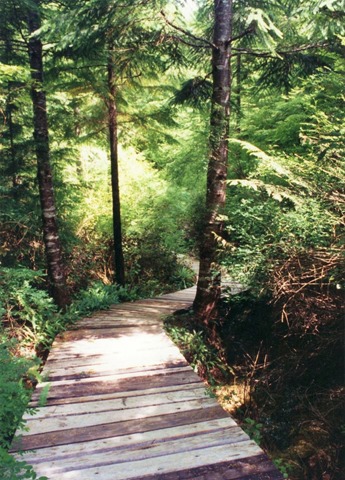 Old board walk is now obsolete

Imagine this ethos – a trail through the forest arriving to a cedar shaked cabin perched on a lakeside cliff – rough finish inside with kerosene lanterns, a woodstove, a propane fridge, a gasoline powered generator and no running water.

For some of you baby boomers this might conjure up memories of the back-to-the land movement. I was fortunate to be able to stick with it and made gradual improvements. We now have a driveway, (thank the Good Lord). 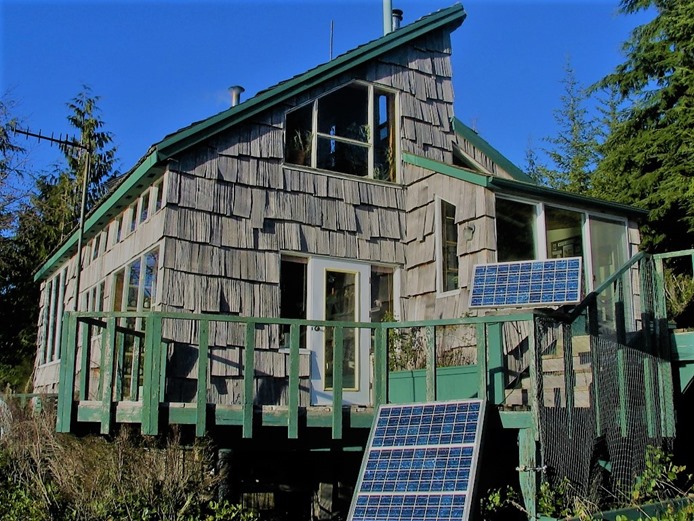 Power-lines are still far away and four decades later in 2017, we’re quite happy not being connected to the electrical grid. We rarely use fossil fuel, except for our transportation needs (which is substantial). I envision the possibility of charging a plug-in electric vehicle, maybe within the next decade.

But for now, I’m talking about back-in-the-day.

The first shift towards energy independence began in 1982 with the installation of Photo-voltaic (PV) solar panels (seen below). It may superfluous, but I so enjoyed listening to my favourite cassette – Heart of Gold, anyone?

However, Neil Young came at a cost – in those days two 50 watt solar panels were expensive – 750 dollars each.

Amazingly, today a person can purchase 40 times more solar electric output with the same amount of money as in 82’ (adjusted for inflation). In other words, the 1500 dollars I spent then for 100 watts of solar power would purchase 4000 watts today. Solar electricity has come-of-age.

Now we have a 1 kilo-watt solar array, considered small by today’s standards.

The next addition to our system was a vintage used wind-charger. Placing the 50 lb. unit atop a 30 foot tower defied some basic laws of physics. Servicing it, took a bit of acrobatics. A downside to wind power, for sure. 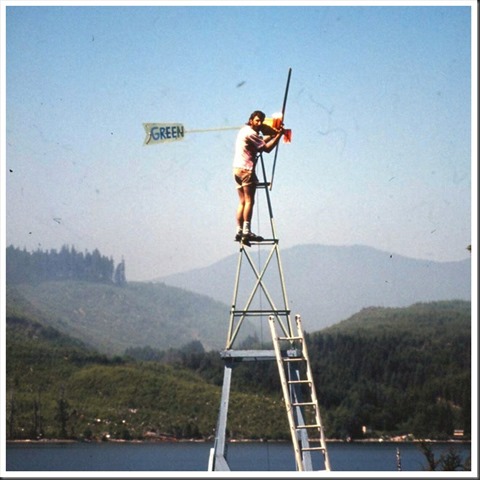 One special joy came in 85’ when the solar water heater was added – it ended the dreaded body baths.

After 32 years we are still using this same simple unit that consists of a black heat absorbing water tank in a glass enclosure. I bought it second hand for $1200. It has no pumps or electronics. Each winter we drain the water out of the tank to avoid freeze damage.

Here on the west coast of Canada the weather is sufficiently warm now, so we re-filled it in mid-March to enjoy free hot water from the sun.

You can see the black tank behind the glass. It works like the solar oven. Focused and trapped sunlight heats the water. When we require hot water we turn on the tap at the sink – cold water enters the bottom of the tank forcing heated water out the top.

Of course as I continually mention, we always have unusual surprises. In 1987 a black bear attacked the propane fridge by tearing off it’s vent on the outside of the cabin. The damage the bear did to the back of the old fridge convinced me to change to a small but more efficient electric fridge now contained within the cabin – and 300 more watts of Solar Panels to run it.

Here’s Billy-Bob’s the Bear’s family. . . behind the cubs note the wind generator tower, now blown over from heavy winds.

When Fran and I got together in 93’ we plumbed in the main wood stove and the cook stove to provide even more hot water. We also added an on-demand propane water heater, which to our pleasant surprise we only need to use with company. (We average only 5 to 7 lb. propane per month). Oh – and Fran also bought her first pair pair of rubber boots. 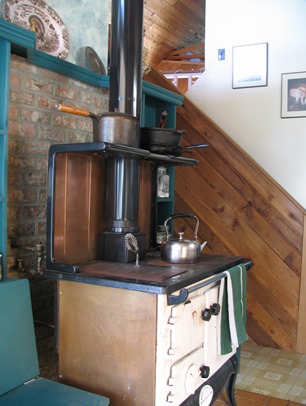 In 97’ we converted the windmill to a state-of –the-art 300 watt air generator and to store all this energy we installed a newer (but used) battery bank. Unfortunately the wind tower was destroyed during an extreme wind storm in 2012.

In conclusion, conservation – or living more with less – is key to our lifestyle. Over the years family and friends could attest to this, and also my constant reminder to turn off the lights.

World spiritual leaders like the Dalai Lama and Pope Francis call us all to be better and more conscious conservers.

As Pope Francis has said in Praise Be: On our Common Home:

“A person who could afford to spend and consume more but regularly uses less heating and wears warmer clothes, shows the kind of convictions and attitudes which help to protect the environment. There is a nobility in the duty to care for creation through little daily actions…”

Thank you all, for taking time to read this.

37 thoughts on “MY EARTH DAY STORY”